New fabric, and a new resolution

It's been a good long time since I posted because it's been a good long time since I sewed, or since I knitted anything exciting enough to post about. Plus, I still want to lose weight, so I've continued to be ambivalent about sewing anything new. But I want to get back into it, and I figure if I sew as I lose weight I will always have stuff to fit me, and if it's something I sewed it ought to be something I can alter later on if I want to take it in. The other problem now though is that I have a lot less time than I used to. I have a new job, which I love by the way, but it is full-time instead of the 80% time I worked before, and it takes greater mental energy and an earlier bedtime so I just don't have the wherewithal to come home at night and do a bunch of crafting. Especially cutting. I hate the cutting part.
But, I still have plenty of patterns, and plenty of fabric, and I went ahead and bought more from Fabric.com just yesterday. As you can see by the accompanying pictures.
I'm taking inspiration from another blog that I subscribe to on my feed reader, Sew Every Day. I like this blog a lot, even though it's not as flashy or tip-filled or even as frequently updated as other favorites like A Dress A Day or Stacy Sews or Gorgeous Things, all of which I also adore. Sew Every Day is nicely written in a straightforward way, and it's accessible, because she just plugs along and does something sewing-related most days, even if it's as small a tas

k as sewing a single seam. She makes lots of good basic clothes for herself this way, which is what I want to do.
So I'm making a resolution to do something similar, and sew a little almost every day. Realistically this will probably mean more like, oh, 3 times a week most weeks, none at all for a week every once in a while, with a two to three day binge of sew sew sew sew sew every six month or so.
The plan I have for now is to keep making dresses, mostly shirt dresses and maybe one or two more duros (even though those are getting kind of played out, they're just so easy and fun and versatile!). I'm trying to make sure that every dress I make is usable for slightly warmer weather (it never gets all that hot around here, but sometimes warm) but also, more importantly, can be layered with a turtleneck and tights and boots for the much more frequent cooler weather. I find that shirt dresses and duros are good for these purpose

s. Although there's also a need for the in between, where I just throw a cardigan or blazer over the top, and duros are hard to put things over because of the kimono-like sleeves.
I also like the dresses to be sort of more on the casual side. Just the fact that they're dresses makes them dressy enough with the right accessories, but I like things that can look dressed down too, and I think once again duros and shirt dresses are good for this, especially if I choose the right fabric. That explains why I'm so into plaid, it can look professional enough for my job, but also casual enough to wear out to the park on Saturday or to the sports bar on Sunday.
Posted by Holly at Friday, October 19, 2007 No comments: 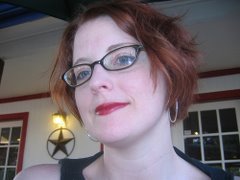